Why do you publicly discount the suffering of the tormented victims from the report “The Hell of Ueckermünde”, Dr. Klaus Gollert? 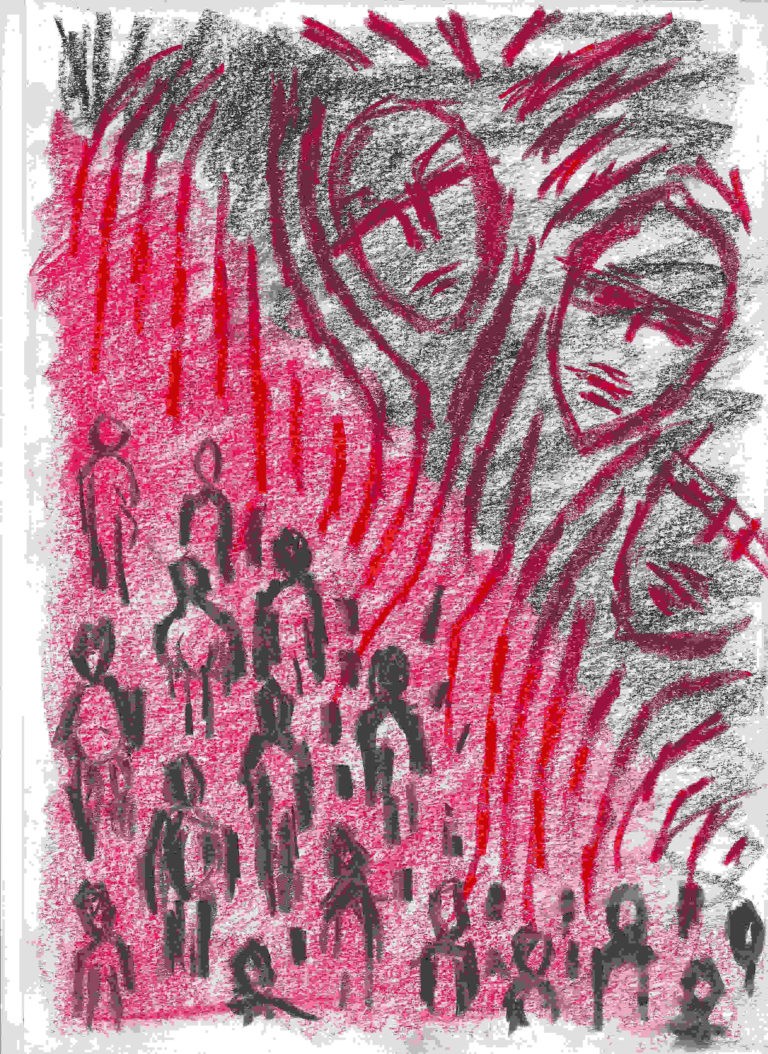 A correction from February 26, 2020 can be found at the end of this article.

In a letter dated February 10, 2020, I asked the University of Greifswald to review the dissertation of the 81-year-old former Minister of Social Affairs, who was responsible for the hell of Ueckermünde. Please scroll to the bottom of the text.

In June 1997, when he was 17 years old, Christian Discher fell into the clutches of the closed ward at the Neubrandenburg psychiatric hospital. He was brought there by a pastor he had sought out for counselling during a crisis in his life. The young man had turned to the pastor because he had recently had a tumor disease, which terrified him, and was hesitant about revealing his homosexuality to the world. However, instead of receiving care and attention, he experienced a complete disregard for his feelings, and was subjected to violence and coercion in a psychiatric ward.

The psychiatric clinic was then under the direction of the head physician Dr. Rainer Gold, whose infamous past should have prevented him from practicing his profession long ago. criminal activities in the Wilhelm-Griesinger Clinic in the Berlin district of Marzahn, a fact which had already been exposed by the German magazine Der Spiegel in 1991. Gold was directly involved in drug trials conducted on unsuspecting patients – without their consent and regardless of the associated risk of possible health damage or potentially fatal side effects. However, the perspective of those affected by the drug tests still barely plays a role today, as can be seen in the study “Testing in the East – GDR drug studies on behalf of Western pharmaceutical companies 1964-1990”.

At any rate, Gold, as a psychiatrist and expert witness who acted as a “yardstick of good and evil”, continued to negatively influence countless lives. One of his many victims was Christian Discher, who had to endure psychiatric forced treatment in the form of severe physical and psychological abuse. This minor was restrained directly after being admitted and given heavily sedating psychiatric drugs. Discher’s abuse soon led to the complete loss of numerous bodily functions which resulted in him losing his ability to speak for a year and a half during and after his admission to Ueckermünde Psychiatric Hospital.

At that time, the Clinic for Psychiatry and Psychotherapy Ueckermünde was led by the psychiatrist Wolfgang Kliewe, who was the head physician in charge. During the SED regime, Wolfgang Kliewe supervised the internal forms of psychiatry. This was intended to move away from the large observation room wards, towards a more therapeutic everyday life with small open wards. However, Discher and the other confined inhabitants did not experience the use of modern treatment methods, which Kliewe boasted about in an interview in 2006. To Discher, it seems a sheer mockery that Kliewe’s then already dreaded senior physician Dr. Ruth Andes, who is still active today in a dark niche of psychiatry, was appointed to the Ethics Council in 2008 at the suggestion of a professor for Protestant theology and the psychologist Sylvia Kühnl.

[Addendum: February 26, 2020: Contrary to what is stated in the local article and in underDog magazine, the then managing director of the AMEOS Diakonie-Klinikum Anklam-Ueckermünde (2007-2009), Frank Acker, appointed the members of the council. After a final evaluation of the sources, it could not be established that Dr. Ruth Andes and the psychologist Sylvia Kühnl were appointed to the ethics council at the professor’s recommendation.]

In Ueckermünde, the defenseless young man, who was derogatorily addressed as “Mrs. Discher” in house 12, was subjected to a lumbar puncture by the assistant doctor André Gille without his consent. Discher was prevented from asserting his rights in the accommodation proceedings because neither the registrar nor the judge responsible listened to him when he was still able to speak. His parents were only called after he had already fallen silent. Gille, now a respected doctor, was the head physician for neurology and psychiatry in Pasewalk until recently.

As early as 1993, Ernst Klee’s report “The Hell of Ueckermünde – Psychiatry in the East” uncovered serious abuses in the psychiatric hospital there. When the ARD broadcasted the documentary “The Hell of Ueckermünde –Psychiatry in the East”, it received major media coverage.  The inhumane treatment and accommodation in psychiatric hospitals in the former GDR sparked outrage. But what was more appalling? The justifications for such treatment given by the staff interviewed in the documentary, or the sight of frightened men and women who had barely seen daylight in years, who sometimes huddled naked in the corners, or emitted guttural sounds while creeping across the bare floor?  The public outcry was followed by public appeasement. Once these terrible conditions were exposed, it appeared that immediate changes to the system were enacted. However, behind closed doors many of these practices remained in place just as Dr. Discher experienced them in 1997 – and he suffered both physically and emotionally as a result. In her study, Sonja Süß, who worked as a psychiatrist in the former GDR and who was responsible for processing the history of psychiatry as a research assistant to the Federal Commissioner for the STASI files from 1993-1997, played down the abuses portrayed in the report and denied that those working there were responsible. Was there political abuse in psychiatry in the GDR? After many years of conducting in-depth analysis of hundreds of files from the Ministry of State Security, Sonja Süß came to surprising conclusions in her monograph: “In fact, some of the doctors who worked as unofficial employees of the State Security betrayed patients’ secrets. In addition, mentally ill people were temporarily admitted to psychiatric hospitals during state holidays; moreover, cases of psychiatric abuse for disciplining rebellious and inconvenient people by the political rulers were proven. However, unlike the Soviet Union or Romania, psychiatry in the GDR was not systematically misused as a state security service instrument for the persecution of political opponents. (Süß, 1998).

In the matter of Ueckermünde, Dr. Klaus Gollert (FDP), the then Minister of Social Affairs, who was held this position until 2015, also made a disparaging statement about the conditions which prevailed there. Not only was the injustice of the past ignored, but it was even able to continue in the departments that were not open to the public. Even the psychiatrist Dr. Rainer Kirchhefer, who succeeded his colleague Gold as head physician in 2011, seems to have little interest in revealing the full extent of the events. On October 1, 2017, Kirchhefer became Medical Director of the Dietrich Bonhoeffer Clinic in Neubrandenburg.

During his stay in the hell of Ueckermünde, Discher not only met many people who were physically, mentally and psychologically broken by the abuse they suffered there and who were incapable of defending themselves against the injustice they experienced, he also met a mentally ill offender in house 12 who had threatened his grandparents with a gun and physically and verbally attacked the inhabitants of his native village for years.

Despite everything, Discher managed to reclaim his life, to study and earn his doctorate, although he had was reported as having lower intelligence when he was discharged from Ueckermünde. Today he can bear witness to the conditions of that time and the violence perpetrated against him and others by the medical and nursing staff. The people from Klee’s reportage and other former patients, on the other hand, were not in a position to assert their own interests to the outside world.

Dr. Christian Discher’s memoir “The Voices of Those Remaining”, published in 2015, vividly and shockingly documents what was done to him and his companions in the institutions in Neubrandenburg and Ueckermünde and by the responsible institutions in the area. At the end of 2019, during his research, he discovered that an extensive network of the State Security was still active in a post-dictatorial capacity, which prevented the violence perpetrated against him and his companions from being investigated in any way.

This network was connected to the father of the protagonist Renate in his book. “The name [name removed] continues to be a great psychological burden to me, as he was the only one of six unofficial STASI collaborators who wanted to annihilate my very existence,” said a witness who worked closely with this man. (Antje Dreist)

Dr. Christian Discher calls for the wall of official downplaying to finally be torn down and for an independent, international committee of inquiry to be set up, or similar measures undertaken to investigate these human rights violations, so that those responsible are finally brought to justice.

In 2017, he submitted a petition to the Petitions Committee of the state of Mecklenburg-Western Pomerania for a reappraisal, which was rejected, although it was within the power of the state parliament to set up a committee of inquiry. However, the Minister of Health Harry Glawe (CDU) declared in a letter from July 5, 2017, that the psychiatry of Mecklenburg-Western Pomerania is by no means characterized by the misuse of power, inhumane treatment and psychiatric coercive treatment. The chairman of the Petitions Committee, Manfred Dachner, concluded in a letter from June 28, 2018, that there were no indications that a committee of inquiry should be established. Having lost this opportunity, Dr. Christian Discher has no choice but to continue to demand a full investigation.

After becoming aware of my memoir “The Voices of Those Remaining”and my awareness raising efforts in March 2015, why did Dr. Rainer Gollert not distance himself from the conditions in the Hell of Ueckermünde a mere eight months later on November 17, 2015, at the celebration 25 Years of the State Parliament of Mecklenburg-Western Pomerania in front of all political decision-makers, but only from the public news coverage?

[Addendum: February 26, 2020: Contrary to what is stated in the local article and in underDog magazine, the then managing director of the AMEOS Diakonie-Klinikum Anklam-Ueckermünde (2007-2009), Frank Acker, appointed the members of the council. After a final evaluation of the sources, it could not be established that Dr. Ruth Andes and the psychologist Sylvia Kühnl were appointed to the ethics council at the professor’s recommendation.]

In January 2008, a project group was commissioned to work on setting up an ethics council at the hospital. “Before the council was officially established, the participants of the event had the opportunity to listen to the presentation of Professor Heinrich Assel from the University of Greifswald. (6/25/2008, Ten Members Are Active In the New Ethics Council, Nordkurier)].

In the wake of investigating the story, I petitioned the relevant authorities at the University of Greifswald to revoke your PhD title, Dr. Klaus Gollert.

Das Negativste, was ich in meiner Regierungs- und Abgeordnetenzeit erlebt habe, war 1992 der ZDF-Beitrag über die „Hölle in Ueckermünde“ [sic.]. Vielleicht wissen das noch einige – das war deprimierend, dass dort, wo wir schon viel gemacht hatten, irgendein Fernsehteam in der Anstalt war und dort gedreht hat und Dinge zeigte, die wirklich schlimm waren. Aber es war eben, wie gesagt, eine Zeit, in der wir im Aufholen waren und nicht alles auf einmal erreichen konnten.“ “The most negative thing I experienced during my time in government and parliament was the ZDF documentary [sic.] about the “Hell in Ueckermünde”. Maybe some people know this already – it was depressing that in this place, where we had already done so much work, some TV team went into the institution and shot scenes which showed some very bad things. However, as I’ve said, this was at a time when we were catching up and couldn’t accomplish everything at once.” (Gollert, Klaus Dr.)

German politicians block investigating and explaining the Hell in Ueckermünde

Letter of rejection, Chairman of the Committee on Petitions, Manfred Dachner, June, 2018